Thanks to my parents’ crazy idea that maybe – just maybe – people would want to travel the world by bike, I grew up spending May through September in Italy from when I was 9 months old until I was 23.  In the early years, before I started spending time on tours,  I would stay with my relatives in and around Forli.

The perks of spending 30% of my childhood in Italy are innumerable but if I were to name a few they include: spending time with family, eating great homemade pasta, meeting new friends,  and eating lots of gelato.  However, there was one problem with the timing for my annual trips to the culinary mecca of Europe – my favorite food was actually rarely made in the summer – cappelletti in brodo – aka little filled “hats”, in broth (usually chicken broth).  This is a typical pasta that is very regional, i.e. you’ll rarely find it outside of Emilia Romagna.

As anyone who has received a quizzical look from a server while ordering a cappuccino after dinner understands, Italians are very particular about when and how you eat certain types of food. This “fussiness”  has a number of possible origins including national pride, regional traditions, or you’ve stumbled into a rivalry between regions about how things “should” be made or eaten.   Cappelletti, falls into the last category. One thing most folks from Emilia Romagna can agree on is that you don’t eat cappelletti in brodo in the summer because it is basically a hot soup and if it is hot outside why on earth would you make a hot soup. For a full article about comfort food and “brodo” see my mothers post.

The regional differences come with the filling. Most of Emilia Romagna fills its pasta with cheese – called cappelletti di magro. My family is from Forli, which is in the southern corner of the region and we make our filling slightly different – we add both cheese and pork. It may seem like an inconsequential difference but it makes a huge difference to your taste buds!  Ironically, our town, and “The Farm” our headquarters in Italy is on the border of where you’ll find one type or the other – if I turn left outside our door and go towards Faenza or Ravenna, I get cheese filled cappelletti. If I turn right, I get the “right” kind of cappelletti. 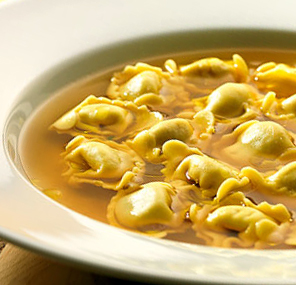 Fresh pasta is one of the key ingredients to this dish. If you have your own egg pasta recipe, make it and roll it out with a pasta roller or rolling pin until it is as thin as you can make it. Cut the pasta into 2×2 inch squares.

For a fresh pasta recipe, you can see our recipe – just don’t cut the pasta into thin strips, cut it into squares once it is rolled out!  You should have about 4 or 5 “eggs” worth of pasta.

Put everything in a mixer and mix and then place in refrigerator while preparing the pasta.

Take the pasta squares and put a dob of the filling in the center. Then, make a triangle by closing two of the opposite ends of the pasta square. Next, take the sides of the triangle and bring them together to make a little hat.  Set aside. Calculate that you’ll probably want between 15 – 25 cappelletti per person (depending on how large you make them). Prepare a nice homemade chicken stock or use store bought chicken stock. You need enough to make cook the pasta and keep a bit to sip, but not too much that you lose your cappelletti in the liquid!

Once finished making your cappelletti, bring the stock to a boil and cook the pasta in them for 3-6 minutes – depending on the thickness of the pasta – it may take longer.  Serve while it is still hot with abundant parmesan cheese!

Maria Elena Price - Maria Elena Malpezzi-Price: 'M.E.' started her bicycle tour leading experiences as a 5 year old, translating ice cream flavors on our first Venice to Pisa tours. Since then, she's led tours in more than 10 countries (specializing in Spain, where she lived for more than a year). With a Bachelor's degree in Psychology and International Affairs and an MBA From the Leeds School of Business at University of Colorado, Boulder she manages the business and its development at the Fort Collins office in Colorado (and of course traveling to Europe in the summers). She loves going out on tour and hopes to manage to travel a bit even though now she is "in charge" of the Fort Collins office! You can e-mail her at MariaElena {at} ExperiencePlus.com.